Mom, my food is looking at me…

Today was the Mom’s Group Halloween Party. In attendance we had: 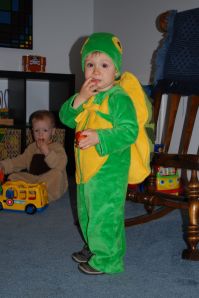 Just for a quick review, this was last year. Jocelyn, Jillian, Cady, Leora, Amedeo and Jack.

And this is this year. Amedeo, Brooks, Cady, Colin, Jack, Jillian and Jocelyn.
As the party started to wind down things got a little, um, silly.

Nope, this wasn’t staged. They just did this. Over and over and over again. They didn’t even seem bothered by the adults hooting and laughing in the background. 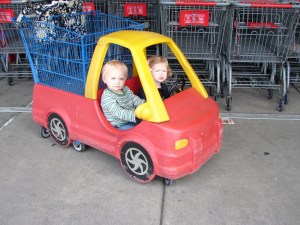 We went to Lowes for some wire and the man in the electrical department was so smitten by Jack that he threw in 2 extra feet of wire. Jack just smiled and acted friendly and this poor man was putty in his hands. “Oh look at how handsome he is! What a great smile!”

Later we went to Giant and the ladies behind the counter at the deli were just beside themselves. “Oh, look at his blonde hair.” “And the curls.” “Oh, Did you see that? He’s making eyes at me!” “Does he want some cheese?” “How about a sample of chicken salad?”
1. The cheese just kept coming.
2. The ‘sample’ of chicken salad was 1/4 of a pound. And Jack is clearly still a vegetarian because he refused the chicken, so I ate it! But when he didn’t want the chicken the ladies behind the counter found some other types of cheese to give to him instead.

I should have gone to a store I like to see if he could get me a free purse or something!

Clearly he fits into the family, because Mommy and Daddy went to the Air and Space Museum on our first date!
http://www.youtube.com/get_player

That face he made, we saw that face quite often today. Hilarious!

We try not to talk about it too much because we risk Daddy getting over confident, but he’s quite skilled with a camera. These are called: 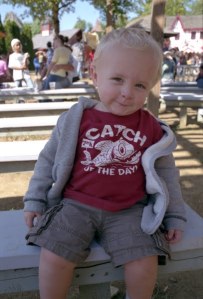 This week (according to babycenter.com) your baby is the size of an avocado. Um, this might be weird, but YUM!

Jack has adjusted to his big boy bed brilliantly (say that 3 times fast). He started sleeping in it last Thursday and he’s now napping 50, maybe 60% of the time. He has slept alone every night. Two nights ago he only needed parental intervention one time. Last night he slept strait through the night all by himself! Since he’s been sick since about Friday I’m really pleased at how smooth the transition is going. Not that I’m jinxing myself right now or anything… 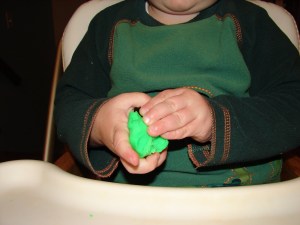 We enjoyed playdoh this morning. After a quick lesson that this is not food we were good to go!

We cuddled on the couch. This was a Jack-guided activity. Apparently it was cold in the house!

We watched the kitty eat a snack. (Needing a reminder or two that this is not to be shared.)

Jack was happy to help PaPa roll the suitcase to the door.

But then when he realized they were leaving… he was less-than-happy.

Last night was largely a success. We had to go in about 4 times total during the night. It reminds me of the ‘just-learned-how-to-pull-up-to-standing-but-can’t-lay-back-down-by my-self phase’. When we, mostly Matt, had to go in it was quick, and thankfully there were no major freak-outs. He slept from 7-7 with his wake-ups only taking away maybe 30 min from his total sleep time.
Today’s nap he took an hour and a half to fall asleep and when he did I went to peak (to make sure he hadn’t somehow knocked himself out instead) I found him laying at the door, blocking me from opening it. Luckily I peaked under the door to see if he was there before just swinging it wide open. Despite the less-than-ideal nap location he did sleep for 2 hours. Score!
Frankly. I wasn’t expecting him to nap at all.

There was an error retrieving images from Instagram. An attempt will be remade in a few minutes.